Today’s vigil was at Los Llanos, inside Cuasi Parroquia del Sagrado Corazon de Jesus, a hamlet north of Jocotenango – the latter a busy town immediately north of Antigua. I’d never visited the town before – had no reason to until I decided to catch as many vigils and processions as possible.

The town is easy to get to, as there are buses at the terminal clearly marked “Jocotenango – Los Llanos” (Q2 fare one way). Once dropped off at the terminal, it’s a 5-minute walk to the church. While Jocotenango has a reputation due to past gang activity a few years ago, locals I spoke to said Los Llanos was a fairly quiet, easygoing and safe town. It definitely seemed so when I visited. The name Cuasi Parroquia is a strange one, as it literally means “Quasi Parish.” Turns out, a “quasi parish” is one that has been granted permission to establish itself as a parish, ut hasn’t been blessed as one by a bishop, for whatever reason, the most common one being that their temple hasn’t been built yet. This did not appear to be the case – unless building a new church is in their plans. 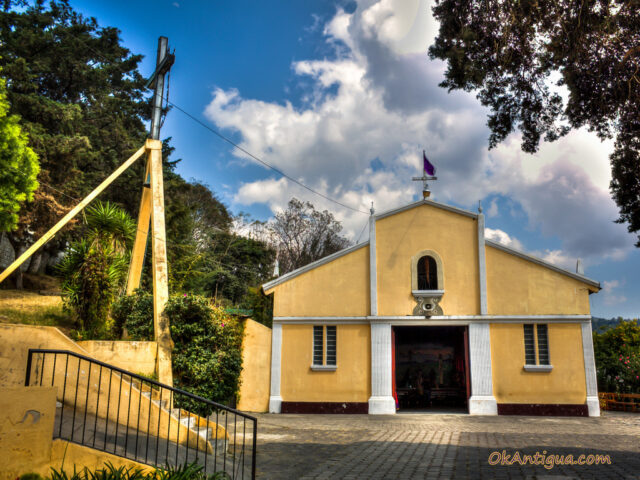 While the exterior wasn’t as glamorous as that of other churches, its vigil display was very well done. Rather than get cute or creative with their alfombra, the folks at Cuasi Parroquia opted for a traditional alfombra design, which was the best I’ve seen so far this season. The display’s theme was “The Rich Young Man“

And of course, no display is complete without an edible animal of some sort, be it carved out of fruit or a baked creation. There’s a tiny procession scheduled at Cuasi Parroquia for next Saturday. It’s so small that it won’t even leave the neighborhood, making it impossible to catch unless you head there for the express purpose of seeing it.

It was easy to photograph the display at Cuasi Parroquia – the church is relatively out of the way, so it was nearly empty when we arrived. Some local girls I asked for directions didn’t even know there was a vigil being held at the church. 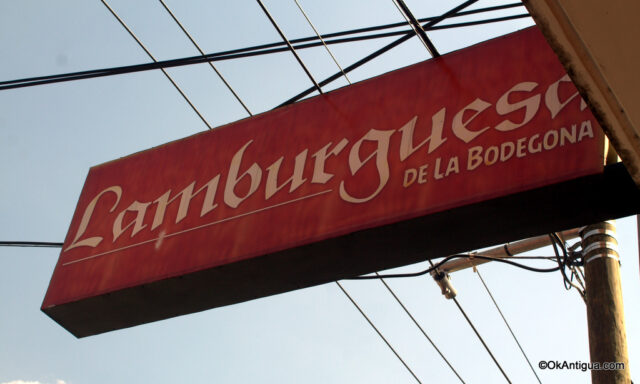 In Antigua, La Bodegona has a small take-out restaurant that sells burgers, hot dogs, and nacho cheese. The burgers are a tasty, inexpensive alternative to McDonald’s burgers a few doors down on 4ta Calle Poniente – the sweet, caramelized onions are what makes this burger worth eating.

The drawback to the Antigua location is that there’s no seating due to lack of space. No such problems at the Los Llanos location. My daughter gave the “Jot Dogs” two thumbs up

Up next is a display at another tiny church, Santa Ines del Monte Pulciano.

Any recommendations for cheap, tasty burgers in Antigua?