Home Holy Week What Are Velaciones (Vigils) During Lent Season in Antigua Guatemala? This month, I’ve set for myself what I think is a crazy goal. I’ll be documenting every procession, vigil and interesting event happening in and around Antigua this Lent season, as listed on the events calendar on this year’s Antigua Pocket Guide.

Will I make it to every event? I sure hope so. I almost didn’t make the first one, a vigil in San Felipe, because of timing issues and scheduling conflicts. But I’m glad I worked it out, as today’s display inside San Felipe Church was mesmerizing.

First, my daughter and I arrived at San Felipe, a town less than five minutes north of Antigua. As usual, there was a slew of street vendors selling the usual treats, along with dishes specifically prepared and only seen during Lent season. We’ll touch on those in a later post. 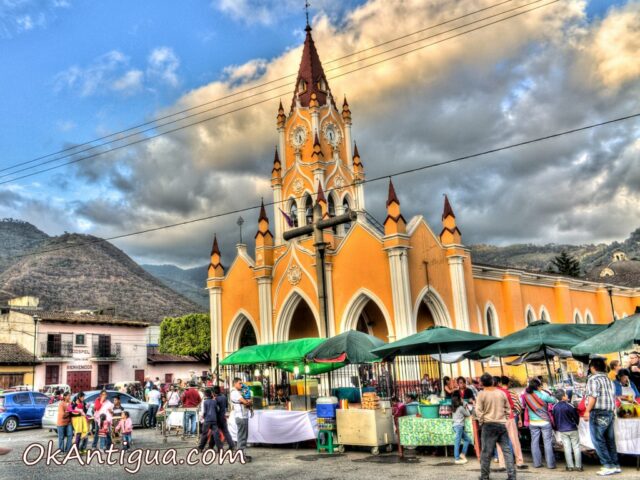 In a nutshell, a velacion, or vigil, is part of the tradition called “Cuaresma“, or Lent – Cuaresma comes from the Spanish word for “cuarenta”, or “40”, which is precisely the number of days Lent or Cuaresma lasts.

Velaciones are a precursor to processions – sort of way to get in the mood of the season. Churches typically prepare as nice a display as they can afford – funded by brotherhoods, or hermandades, who are the ones who actually put together the entire display.  Churches are decked out with their best curtains and decorations and all are done to represent a particular theme, usually a biblical scene. As is the custom, intricate sawdust and fruit carpets are laid out in front of the scenes, many strewn with pine, which gives the air a distinctive fragrance.

San Felipe’s display was striking and wowed us from the moment we entered the church. The particular theme of this vigil was based on the biblical account of the time Jesus walked on water. Depicted on the scene was Peter, the disciple who dared to go out on the water to meet Jesus, only to see his faith falter, which caused him to begin to drown. Is at this moment that Jesus comes to Peter’s aid.

What was cool about the scene is that there were speakers in the church playing the sounds of a storm – wind and lightning sound effects included. In addition, the boat the disciples were on actually rocked back and forth a few feet, adding a bit of realism to the scene.

When we were there, a reporter from Channel 3 showed up. I doubt we made the 6 o’clock news, as the cameras were never pointed at us. After taking more than enough pictures and video, we headed out to buy some snacks. I love how they serve mangos here, which can be pretty messy when you try to peel one on your own. 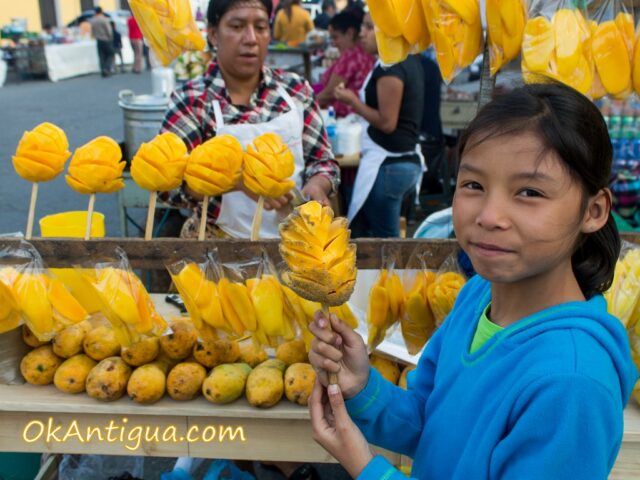 No, she didn’t drop the mango on the floor and coat it with dirt

By the way, something I find amusing is how a lot of fruit here is coated with lime juice and pepitoria (dried pumpkin seeds), even peanuts and cashews. They’re fine to me without any added dressing, but to each their own – my daughter and millions of Guatemalans disagree with me, so there may be something to it.

Up next? A vigil at San Jose Cathedral and one at the tiny church in Santa Catarina Bobadilla on Friday. But you already knew that if you downloaded my free 2015 Antigua Pocket guide, right?