One of the advantages Antigua Guatemala has over similar expat havens is its proximity to Guatemala City. Don’t laugh, I’m serious! It’s nice to live in a tucked-away small town like Antigua and know that big-city conveniences are an hour away, give or take a few minutes.

Guatemala City (or “Guate”, as it’s often referred) gets a bad rap for its high crime statistics, but the truth is it isn’t all that bad, provided you don’t wander into the bad areas (like Zone 18, 5, 3, and 7 for example). If you know where you’re going and drive during daytime hours, these areas fairly easy to avoid and typically safe.

Guate has the big shopping malls, National Theater, IMAX movie theaters, and a very good zoo, among other things. If you have children or are a fan of theme parks, you’ll be glad to know there’s a pristine, beautiful, and fairly inexpensive theme park – Mundo Petapa – within driving distance of Antigua.

I’ll give you all the details like hours and prices at the bottom of this post, but first, let me give you a quick tour.

The Instituto de Recreacion de los Trabajadores de Guatemala (IRTRA) was set up as a joint enterprise between private companies and the government back in the 1960s to offer recreational options for employees of said companies. Today, employees of companies that belong to IRTRA’s charter can qualify to contribute 1% of their salary to IRTRA, which entitles them to free admittance to all IRTRA facilities (six theme parks total) and reduced rates for the IRTRA-owned hotel complex in Retalhuleu (Reu for short).

IRTRA’s best theme parks – Xetulul and Xocomil  (water park) – are also in Reu (3 hours from Antigua). Those that have a company pass are known as “afiliados“ (affiliated) while the rest of the public is the “No Afiliados” (non-affiliated). Which for most people this means they have to pay to play.

Of all the IRTRA theme parks, the closest one to Antigua is Mundo Petapa, a beautiful place that has something for everyone. We went on a Thursday (during a school day), and the park was blissfully empty. I’m not really a fan of theme parks, having lived in Florida for many years. Dealing with oppressive heat, throngs of people, long lines, and having to pay exorbitant prices junk food is not my idea of fun – the type of “fun” the Mouse so handsomely profits from. Mundo Petapa was *gasp* a highly enjoyable experience, which I would not hesitate to visit again. In an off-day, of course.

If you’ve ever been to any of the Disney properties, one of the things that will stand out is the lack of recognizable “characters”. There are clowns about – very competent ones I might add, but not anything that you can point to specifically as the “brand”. Instead, each park has an identity it owes to its main “landmark”. For Mundo Petapa it’s the rainbow arch gateway at the entrance. For comparison, the main landmark at the Xetulul park is an immense, scaled-down replica of a Mayan pyramid at Tikal. 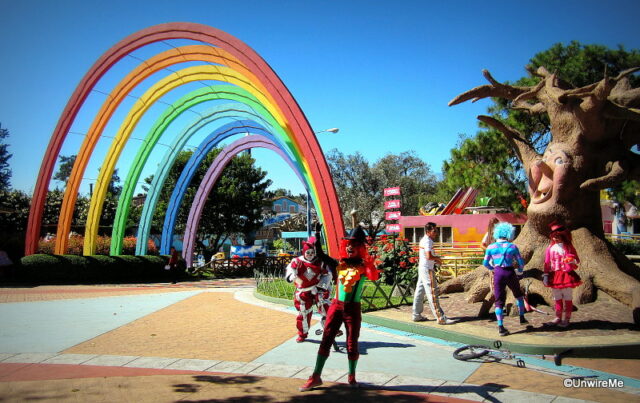 The park is loosely split into different plazas, some which feature games and rides for young children. There are very clean bathrooms throughout the park, concession stands, and restaurants, all which are reasonably priced. Near the entrance, you can rent lockers (something to keep in mind, as hats and bags are not allowed on rides, which means leaving your belongings on a nearby bench – not the best of ideas). 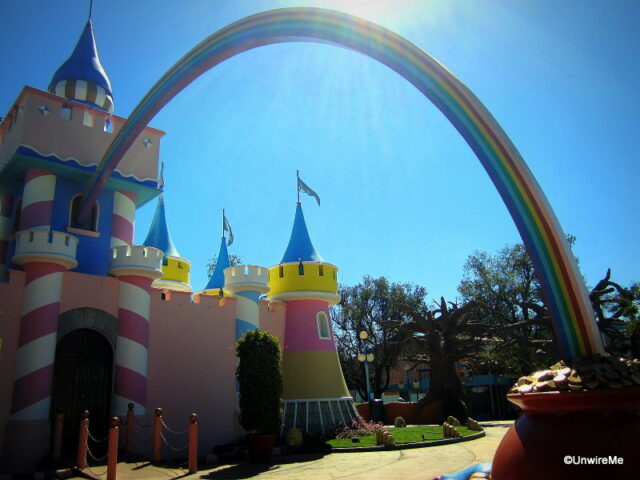 The park is very well-maintained

The main attraction in the park is the Rascacielos (Skyscraper), a 53-meter high free fall tower. The views from up here are amazing, as on a clear day one is able to see Guatemala City entirely and get a glimpse of nearby volcanoes. If you’d like to catch the views, but don’t have the stomach for this ride, I recommend the beautifully polished, gentle Ferris wheel at the other end of the park. 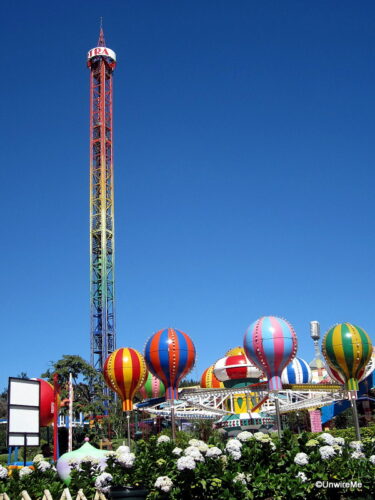 Mechanical rides are well-maintained and in excellent shape. 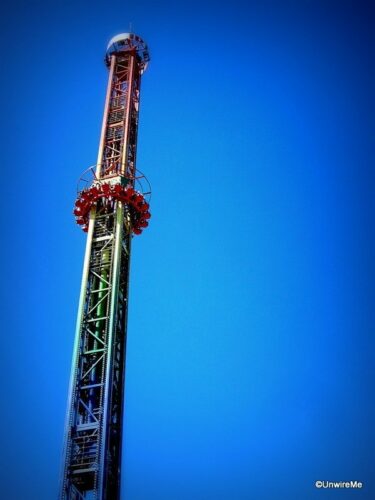 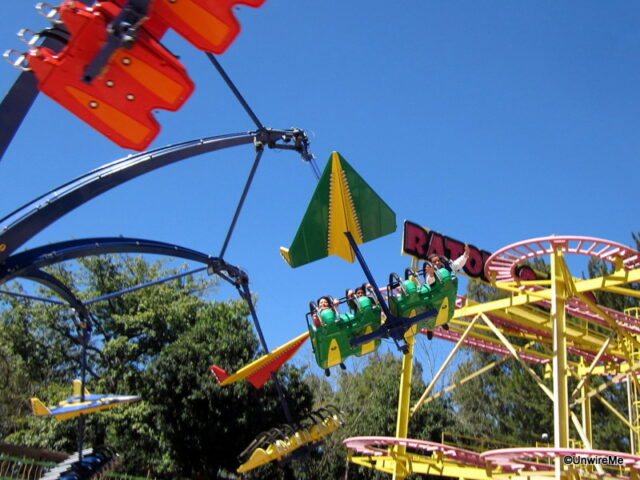 From atop the Ferris wheel, I was able to see nearby volcanoes. I don’t know if it’s because I’m a history nut or because I’m getting older, but I really enjoyed the quiet end of the park, which features a small replica of Guatemala City’s colonial-era buildings and streets. There was a replica of a 1950’s ice cream shop – which sold gigantic, inexpensive sundaes and milkshakes – and other nice touches. 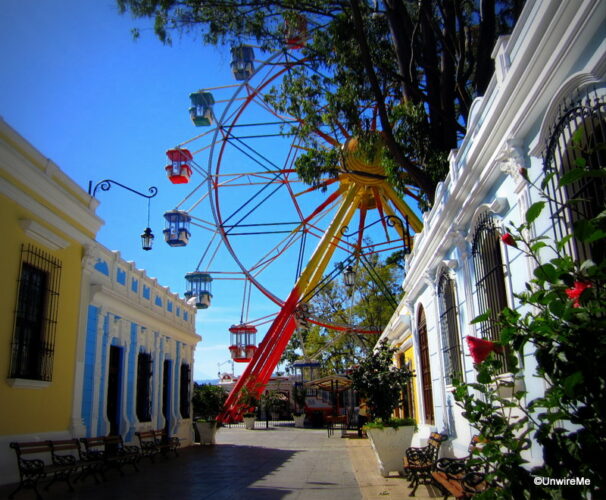 There’s also a small train that loops around part of the park. In addition, there’s a “social” area that features an Olympic-sized pool and a kiddie pool.

I also enjoyed the small zoo, which not only was very well-kept but featured an amazing aviary one could walk through and get pretty close to the birds. They also have the somewhat rare white peacock, which amazingly, it’s even more stunning than the colorful ones. 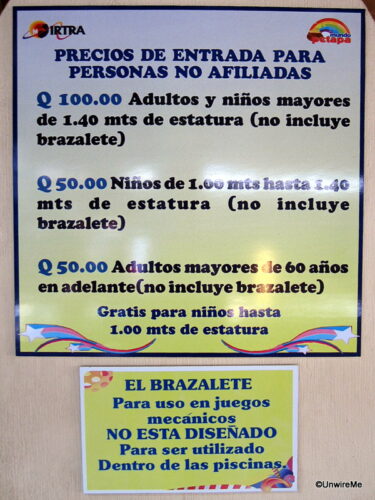 Now, keep in mind that this is only the entrance fee. If you want to use the mechanical rides, you have a couple of options. 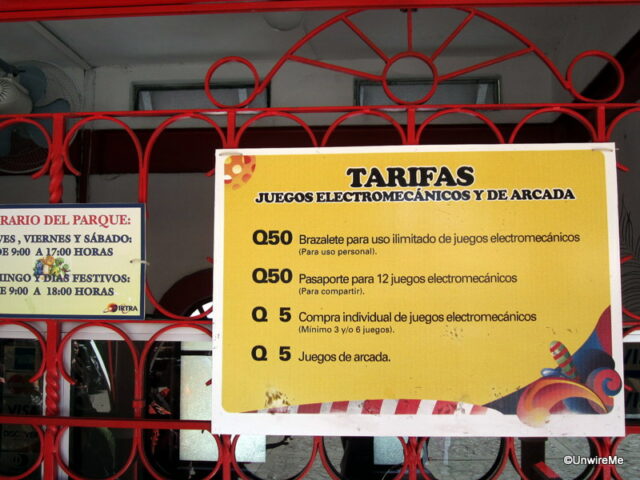 You can either buy an unlimited-use bracelet for Q50 (can’t share the bracelet), or a 12-ride ticket (shareable) for the same price. One can also buy three and six-ride tickets (comes out to Q5 each ride). Arcade game tickets are Q5 each. If going on a busy day, it might make sense to buy a ticket. Because it was an off day and often we were the only ones standing in line, I easily did more than 12 rides. IRTRA has its own parking garage and it is secure. For cars, it’s Q20 (cash only), and progressively more for buses depending on size.

I loved it and highly recommend it.

Have you visited any of the IRTRA theme parks?

1 thought on “Things to Do in Guatemala: Visit Theme Park IRTRA Petapa”