For the third day of Lent, my task was to visit the vigils at San Jose Cathedral – once the biggest church in the city during colonial times, and at Santa Catarina Bobadilla, a hamlet on the outskirts of Antigua with a church so tiny it would easily fit inside the courtyard of some of the houses I’ve seen here.

Even though Santa Catarina Bobadilla is closer to my home than San Jose, I headed to the latter first to make better use of my time.

This church is really a shell of what it used to be. Damaged by an earthquake, space the church now occupies is only what at one time was the entrance foyer. The ruins of the massive nave are behind the church. Even the facade of San Jose Cathedral, which has been restored, lacks the two massive bell towers it once sported on each side. As I got nearer the church, I heard the unmistakable sound of Lent – the traditional pito (whistle) and tambor (small drum), announcing to the public where vigils and processions are being held that day. I’ll upload a video later – once you hear the ditty once, it’s unforgettable. The flute, known as tzicolaj, is what the indigenous Maya used for their spiritual rituals. As with many other things, it was eventually adapted to serve Catholic traditions. The drum is known as a tun. This particular vigil was an honor to the image of Cristo del Perdon – the crucifix at the altar. Once thought to be the work of famous Portuguese sculptor Quirio Cataño, historical research now dates the image to the mid-18th century, author unknown. 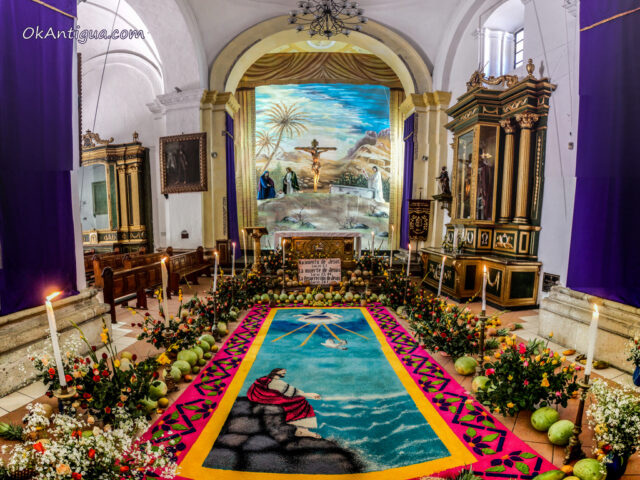 The theme of the vigil was the life, death, and resurrection of Jesus – the crucifixion flanked by a nativity scene to the left, an empty tomb to the right. The flower carpet depicts the Trinity – Jesus, a dove (Holy Spirit), and the voice of God coming down from heaven. Elsewhere on display inside the church was the image of Jesus del Desamparo, one of the most important ones in Antigua, as it goes out on a procession at prime time during Holy Week – during Passion Thursday and Good Friday. Another interesting exhibit was the robes worn by the image of Jesus del Desamparo (above), which changes every year. A bit of gossip here: a person at the church told me that the robes are donated by church members – robes can be quite expensive due to the material used. Basically, whoever arrives first to the church with a robe for the image gets the honor of seeing the image wear their robe for the procession – sort of a holy catwalk.

Well, one year, someone showed up first to donate a robe in a color unlike any other – guess which one below – which led to the robe being ditched at the last minute for being a little too unconventional for the procession in favor of a more regal one. I’m told the lady threw quite the hissy fit when she discovered that her handiwork wasn’t going to be on display. Work was done, it was time to head to the next vigil.

This hamlet – home to less than 400 people, has the honor of hosting the first procession on the first Sunday of Lent – something they take quite seriously. Their church is tiny – so much so that the display took up the entire church. It was necessary to stand outside the church in order to see the display. The display at Santa Catarina Bobadilla was far more interesting than the one at San Jose. What did the aquarium flower carpet have to do with the scene in the background (The parable of the ten virgins)? Absolutely nothing, as far as I could tell, but still very cool. The fruit artwork was pretty cool. Didn’t know you could do that with a watermelon

After taking enough pictures and stepping on enough toes, I headed out to take more pictures. The atmosphere was quite more festive than at San Jose Cathedral, with vendors and children running around – much like the one at San Felipe Church.

I spotted a vendor selling wheat spikes in front of the church – the first time I’d seen those. I struck up the conversation with the man, who told me wheat (grown in Tecpan) is a traditional decorative element of Lent – something Google confirmed later. In the middle of our conversation, some goons from the Hermandad (the brotherhood in charge of fundraising to organize and create the displays) showed up and in a hostile tone asked him if he had a “permit” to be there. Meaning, had he paid his dues to sell there. The man, somewhat nervously, told them that he had received permission from the Brotherhood’s President to sell his wares until midday.

After the Hermandad brothers left, I asked him how much did the permit cost. “About Q20 to Q30”, he replied. So next time I hear the words “devotion” and “tradition” regarding Hermandades, all I’ll think about will be cash register sounds – religious traditions here are big business.

Feeling bad about how the vendor was treated – they could’ve been nicer – I bought a few wheat spikes, which the wife loved and are now decorating our home. Well, not exactly. The street food available was what you can find pretty much at any street fair. Looking for something salty – it was about lunchtime, I figured I’d decide between plataninas (fried green plantain slices) and chicharrones de harina (fake pork rinds made from puffed wheat). I went with plataninas, which were good.

On my way out of town, I spotted Domino’s selling pizza by the slice, something they don’t typically do at their Antigua stores. Not exactly Lent food either, though as with everything, it wouldn’t surprise me if they were offering cross-shaped pizzas 40 years from now as venerated Lent tradition. Anything for a buck. 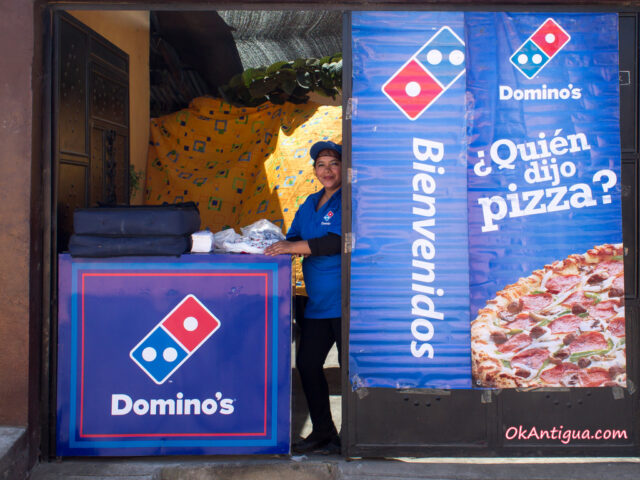 Up next? A vigil on the first Saturday of Lent and more traditional Guatemalan food. Read the Pocket Guide to find out where I’ll be next :)