If you’ve ever visited San Juan del Obispo‘s main plaza, one of the first things you’ll notice – it’s impossible not to – is the immense building that sits behind the church. In fact, chicken buses heading to San Juan del Obispo from Antigua (2.00Q for one way fare) will drop you off next to it, rather than the main plaza, which is located about half a block further up the road. After almost three years of bopping around Antigua, I finally made the time to visit what is known as Palacio del Obispo (Bishop’s Palace), the grand “getaway” home of former Bishop Francisco Marroquin – he’s the man featured in the 100Q bill.

This residence, like other buildings in Antigua, almost crumbled due to disrepair. Livestock grazed inside it freely, before restoration efforts began at the beginning of last century. 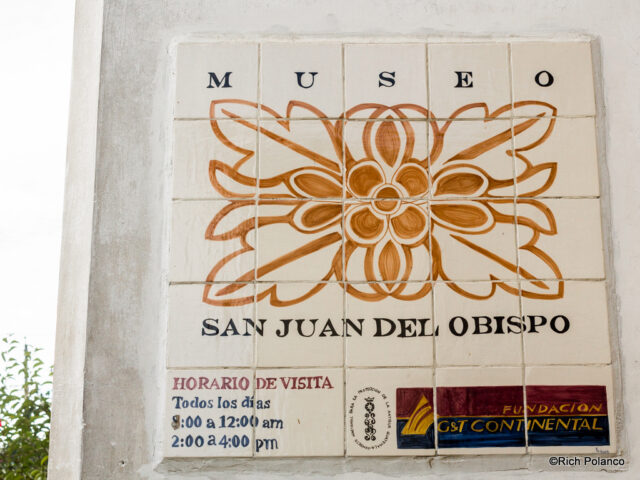 The tour doesn’t have a set price, as it’s supposed to be a “voluntary” donation. They should drop the charade, as there’s nothing “voluntary” about it. When we pressed for an amount, they said it’d be Q10 per person – museums here typically charge nationals Q5. A bargain anyway at Q10, though it seemed that more was expected to be donated.

I got the vibe that we were rushed through the place – the tour guide routinely shut off lights before I was done taking pictures and walked several feet in front to pressure us into moving along faster. Believe me, it was before lunchtime, so it wasn’t like I was taking my time.

The museum has several, nicely done information panels, both in English and Spanish. Very early on I decided I wasn’t going to read them all, so I did my usual, which was snap close-up pics of the panels to read at home at leisure.

We could’ve easily spent well over an hour and a half there, but were done in well under 45 minutes. In the end, I resorted to ignoring the passive-aggressive impatient attitude of the tour guide and took the pics I needed as quickly as I could.

As mentioned earlier, a lot could be said about Francisco Marroquin, one of the most important figures in Guatemala’s history. You can tell he was because his face is on the Q100 bill, which was the most valuable currency until it recently ceded that honor to the Q200 bill (which hardly anybody uses).

When the second capital of the kingdom, located in present-day Ciudad Vieja, was buried under a mudslide coming down from Agua Volcano, it was Marroquin who organized rescue efforts and the move of the capital to present-day Antigua. He also founded the city’s first hospital and was instrumental in the creation of the first university.

Marroquín worked to release indigenous people from the encomienda system, which was forced servitude, and from the high taxes imposed by the Spaniards on the native population.

He also learned to speak the language of the Maya, on his own, which served him to do the first translations of religious scriptures into their language. Though Marroquin had a home in the city, the Palacio Episcopal in front of Parque Central, next to San Jose Cathedral, he chose to build his private home on the outskirts of the city.Construction was finished somewhere between the 1530s-1540s. It was here that he founded the town of San Juan, now known as San Juan del Obispo in his honor.

Construction was finished somewhere between the 1530s-1540s. It was here that he founded the town of San Juan, now known as San Juan del Obispo, in his honor.

The residence itself is lovely. The entrance courtyard has a small fountain and there are numerous rooms throughout. The left side of the first courtyard is off-limits, as it contains the private offices of the Order of Bethany, the nuns in charge of managing the building.The hallway on the right leads to a smaller courtyard, which contains what once were the private quarters of Marroquin and a small, richly detailed chapel.

The hallway on the right leads to a smaller courtyard, which contains what once were the private quarters of Marroquin and a small, richly detailed chapel. The front part of the building was likely used to host visiting dignitaries and visitor’s quarters, while the smaller, more secluded rear courtyard was the domain of the bishop. It also offers the best views of the valley, as well as a private side entrance. The small chapel has been lovingly restored and it is beautiful. The building would not be what it is today were it not for the efforts of Bishop Mariano Rossell y Arellano (below), who used his own money to begin restoration of the palace.

The furniture that is now on display at what used to be Marroquin’s quarters is not original – it belonged to Bishop Rosell. As you enter the Bishop’s quarters, you’re greeted by Rosell’s original desk, in what used to be his office. Behind it, a display shows some of the original artwork that survived to this day. The furniture is of the highest quality and made by top-notch Guatemalan woodworkers. If you pay close attention to the detail of the furniture, you’ll notice Bishop Rosell’s coat of arms and many references to it – mainly roses – a play on words with his last name, I imagine, as “rosa” is the word for “rose” in Spanish. Roses are everywhere, very visible on furniture and doors. One of the most distinctive details are the dragon waterspouts, which encircle the building and courtyards. From accounts I’ve read, people are given a look at some of the items produced in San Juan del Obispo at the end of the tour – chocolate and handicrafts are made available for sale – but nothing like that was suggested, as we were ushered to the exits. I guess they figured they were getting all the money they were ever going to get from us. In all, I recommend visiting. We probably caught them on a bad day, as the place was buzzing with activity from retreat-goers, leaving them little time to deal with pesky, low-budget tourists.

Find more cool stuff to do in Antigua here.