Last week, I talked about the recent security problems that have cropped up in our neighborhood. You can read all about it here (Is Guatemala Safe?). I tend to avoid these meetings since they go on for hours and rarely much of anything gets accomplished. I changed my tune when I heard that some neighbors had proposed home searches to root out any thieves living in our midst. Being intensely private about my home, I was set on fighting it tooth and nail at the next meeting. The last thing I wanted was a stranger inspecting my house and taking note of my computer equipment and a few other valuables I had in my possession – I take good care to lay low and not flaunt anything I own.

Why Bullies Have a Field Day in Guatemala

It turns out the neighborhood is very divided about what to do, something one wouldn’t know just by sitting in on a meeting. Something you should be aware of is that Guatemalans dislike confrontation. Even when they disagree about something that’s being proposed, they’d rather go with the flow, say yes to everything and avoid making waves, even if they decide to do exactly the opposite afterward.

I learned all this at the “pre-meeting” meeting that happened last Thursday. Ahead of Sunday’s meeting, some neighbors had asked us to meet to devise a strategy of attack. Attack? Yes, attack. Since they agreed with each other, they had no problems voicing their displeasure as to why they objected paying the extra Q200 to buy additional cameras for the neighborhood.

The source of their animosity? The previous President of the Homeowners Association (HOA), who many had suspected of stealing funds and the brainchild behind the security camera proposal. He stood to collect Q18,000($2,250USD) – or Q200 from each of the 90 houses in the development – to purchase security cameras many suspected were worth far less. Not only that, he claimed during his previous administration that owners stood to receive Q8,000 for improvements from the builders, though it was later discovered the amount was Q16,000. He had also failed to provide a full accounting of all the money he had received during his term as President – many of the bills owed by the HOA remained unpaid when his term ended last year. It’s worth noting here that something similar happened with the treasurer of a previous gated community I lived in, so I’m 2 for 2 when it comes to living in places where HOA treasurers are corrupt individuals.

Despite all this, no one had brought any of this up during any of the meetings. Again, confrontation is not something in which Guatemalans are willing to engage. I spoke to a neighbor at length about this, and she was at a loss to explain it as well. I theorized that maybe it had to do with all those years living with a repressive government – which could easily get you killed, as is sadly happened with the father of my mother-in-law. Maybe it had to do with deeply ingrained politeness. Underneath it all, it seems most people here are afraid of possible repercussions – the “what might happen if I disagree,” something my wife brought up (read my last post).

Buying in a Residential Development

For all their bluster and encouragement during the “pre-meeting” about how they would band together and speak up against the ex-President, Sunday’s meeting was a flop. Nobody at the pre-meeting confronted the bully. Not even when the bully brought a representative of the security company to show off the cameras. When a neighbor asked how much the cameras would eventually cost, the salesperson hemmed and hawed and said a price quote had been submitted, completely dodging the question and slinking off with his cameras as fast as he could. Oh yeah, the fix was in, and it was apparent someone was going to get a fat commission for their trouble. Because the owner – not renters – would be liable for any extra payments – I decided to keep my mouth shut and hang back, knowing full well nobody would have my back should I engage the bully. That much was evident.

The meeting lasted about three hours, and many of the same points made and remade over again, without ever reaching a consensus. If you’ve ever heard a Guatemalan Congressional session – or US Senate debate on C-SPAN – you have an idea how the meeting went. Lots of talks, very little in the way of actionable ideas.

What I did learn was that if I ever decided to buy property in Guatemala, there was a slim chance to none that it would ever be in a new residential development. Based on all their griping about the construction company – of course, there wasn’t a representative present, so they felt free to complain – it’s obvious one should never buy based on promises made to add this or that improvement to the property. It’s very likely that whatever you get when you buy in, that’s what you’ll be stuck with. Of course, this probably doesn’t apply to long-established residential areas, though I’d still make sure to ask around how well-managed the HOA is. If it’s not in writing and signed by a legal representative of the company, don’t believe a word any real estate agent or seller says.

About Being an Absentee Landlord¡

Speaking of property here, I’d also caution you against being an absentee landlord. Last year, a band of 47 people (which included attorneys, land registry employees, notaries, and others) was dismantled. One of the lawyers connected to the fraud? The son of the former judge of Guatemala’s Supreme Court.

They targeted empty lots and houses in areas popular with expats (Sacatepequez and Izabal). With the help of government employees, they were able to determine who the owner was. Their favorite target? The elderly living in the US.

Once an absentee owner was found, they forged signatures on all paperwork and took possession of the property, to the surprise of returning owners. In some cases, the owners were murdered to discourage legal prosecution – read an article in Spanish here. One of the homes was located in Antigua, according to this article. 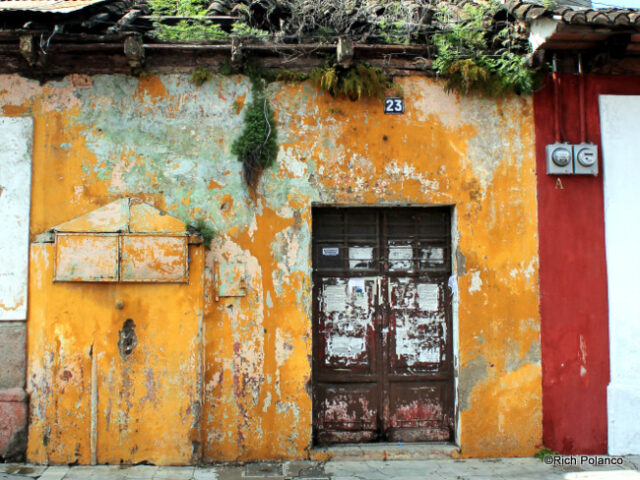 Abandoned house? Not yet, since the electric meter is still in place.

It’s not my intention from discouraging you from buying property in Guatemala. In fact, there are a lot of deals to be had, as long as you do your due diligence and hire a competent attorney. And be especially wary of fast-talking expats offering you the sweetest of deals. Chances are they’ve already sold that same deal on the same exact property more than once.

What has been your experience like buying real estate in Central America?