One of the benefits of living in a small town on the outskirts of Antigua is that you run into all sorts of events that go unnoticed by those who stick exclusively to Antigua’s center. On more than one occasion we have run into festivities and carnivals that we had no idea were scheduled.

A popular event that takes place in towns all across Guatemala are “Convites”, which literally means “invitation to gather”. These Convites vary wildly in size and traditions, but at the core they are really just parades that offer locals the opportunity to have a great time and listen to music. Convites are generally held a day before a major religious procession, though this is not always the case.

The particular convite we encountered took place in San Miguel Escobar, a small town annexed to Ciudad Vieja. The purpose of the convite was to announce the town’s New Year’s Day procession, featuring the image of Virgen de la Concepcion. The church of San Miguel was decorated splendidly. 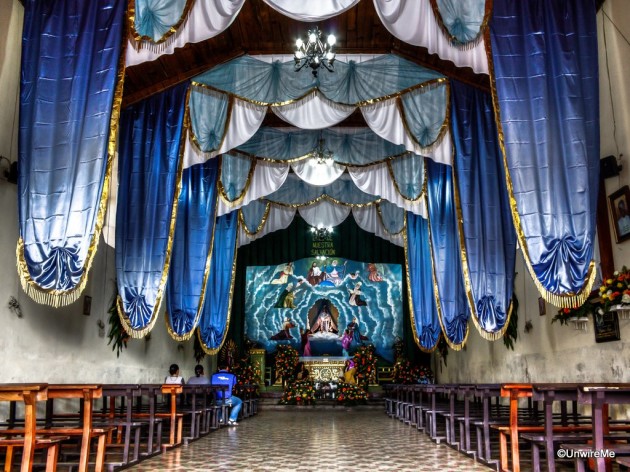 The main event today, however, was the convite running through the town’s streets. Each “cofradía,” or “religious brotherhood,” organizes a particular display for the parade. Often, they’ll choose a religious theme to highlight. Also, groups of neighbors get together and organize groups that are set up to participate in events like this one.

A popular theme is that of “old people dancing.” It got started about 20 years ago and they always make an appearance during major festivities. Here’s a brotherhood enacting the “Prodigal Son” scene from the Bible. Children are prominently featured in these parades. This particular float’s theme honored Virgen de la Concepcion, whose procession was scheduled the next day. 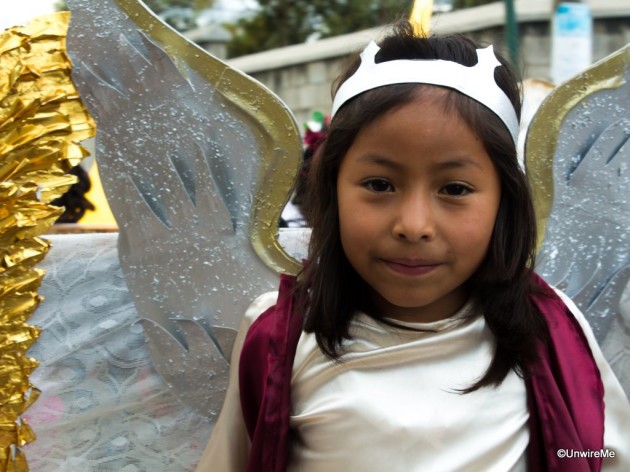 Each “Virgin,” or representation of Mary has a special dress/crown that is instantly recognizable. The virgin dressed in blue with the silver crown is Concepcion. This other float featured Virgen de Guadalupe, of Mexican tradition, which would explain the red/green dress matching the Mexican flag. The mustachioed companions represent Juan Diego, the first indigenous American saint who first saw the apparitions of the Guadalupe Virgin. The usual day of celebration for Guadalupe is on December 12th, but I guess the costumes were too good to pass up using them a second time around. This particular float is an old tradition. It features Death, Satan, and his minions. Per tradition, Satan’s “personal assistant” carries a notebook “writing” down names of those that Satan has his eyes on. By the way, if you notice their hair, it’s long and curly, which suspiciously resembles that used to represent Spanish Conquistador Pedro de Alvarado’s famous mane of hair. A not-too-subtle dig at the authorities, perhaps? Most of the town comes out for these parades when they roll through town. We did not spot a single tourist among the crowd, even though Antigua was crawling with tourists that day. Here’s another float, depicting the scene where Jesus told Peter to throw the fishing nets overboard once more. No parade could be complete without music, which was provided by the Viejas Coquetonas, or “Flirty Old Ladies.” They put on a short show at each stop, which can get tiring after a while. Below, there’s a YouTube clip I recorded of the event. People that find Antigua too “snobbish” or not “authentic” enough need to get out more. There are plenty of Guatemalan traditions to enjoy if one wants to find them.

What are your favorite Guatemalan traditions?

Every country has their own holiday traditions when it comes to food,...
Read more
Living in Antigua