By Rich Polanco
FoodiesTo Do

Restaurant Cerro San Cristobal is a neat place to visit if you want to get away from Antigua Guatemala for a while. It’s a relatively recent attraction in Antigua that opened its doors on October 2014.

Cerro San Cristobal doubles as an organic farm and vegetables from its farm are sold at Nim Pot, the highly-recommended handicrafts market on Calle del Arco / Arch Street / 5a Avenida Norte.

This restaurant/farm is hard to miss, as the hill it sits on can be seen from nearly anywhere in Antigua – just look for Agua Volcano, then look left of it for the small hill nearest to the city (to the southeast). Getting To Cerro San Cristobal

A much easier option is to take head to Nim Pot, which offers shuttles to the restaurant – the roundtrip costs Q10 per person. There isn’t a set schedule, so be prepared to wait. The shuttles run daily, from 8 am to 6 pm.

Alternatively, you can call them directly at 7832-2681 and arrange for the shuttle to pick you up directly at your hotel.

The restaurant’s grounds are stunningly beautiful and very well done, as is the entrance leading up to the restaurant. 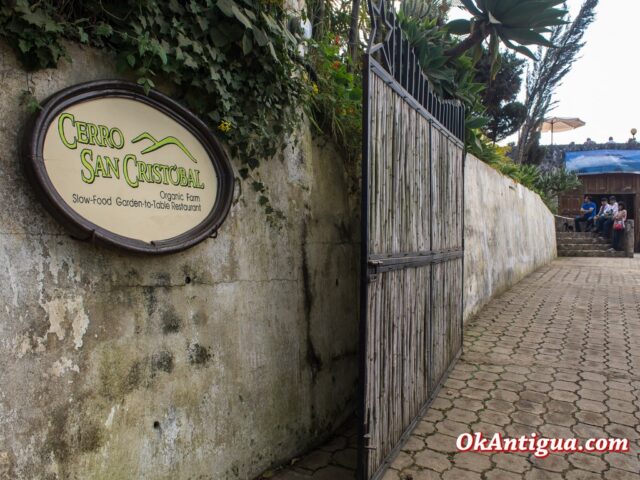 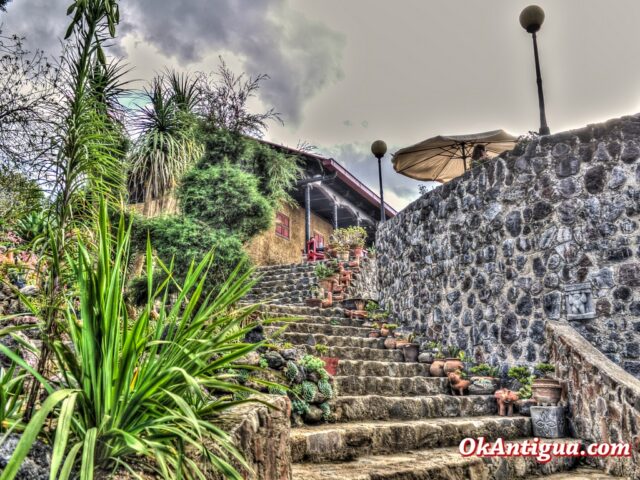 Stone steps leading to the restaurant

The views of the Antigua valley from atop the hill were fantastic and much better than those at Cerro Santo Domingo – no knock on the latter’s views, which are excellent if you’d rather see volcanoes.

By the way, if you want to see New Year’s fireworks, this is a great place to do it. Check out this video, taken from Cerro San Cristobal at midnight on New Year’s Day:

While there’s the main dining area in front of the restaurant, there’s also a covered bar and lounge area below the main seating area, as well as quieter areas near the edge of the hill. I took the time to poke around and take some photographs of the gorgeous setting. 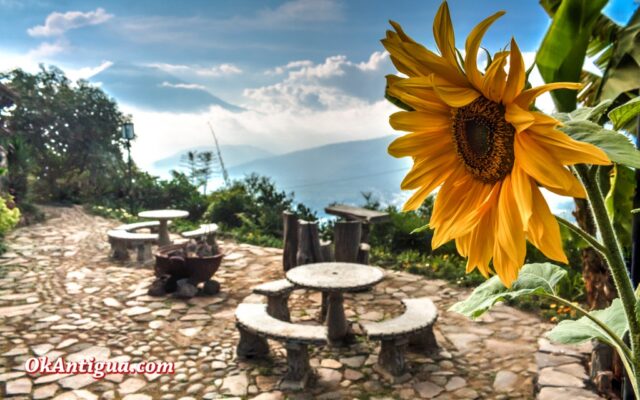 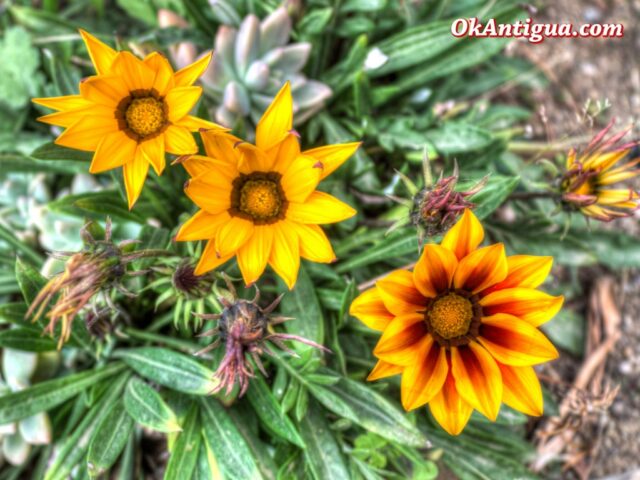 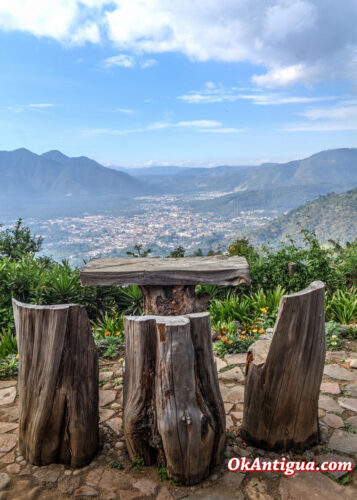 Lunch with a view

The restaurant has its organic farm behind the main building, and it’s where vegetables used to prepare the food are harvested shortly before consumption. Feel free to wander around and check it out.

There are tours of the farm daily in Spanish – call the restaurant for times. There’s also a greenhouse onsite with over 200 varieties of orchids. 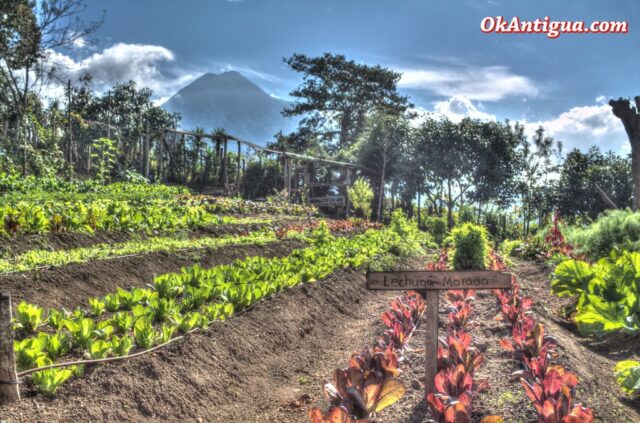 The restaurant usually has live music. Since we were checking out the place after lunch, we weren’t particularly hungry – a good thing, considering that between the time we waited for the shuttle and the time we arrived, almost an hour and a half had passed.

When we arrived, there was no one to greet us nor the elderly couple that had come on the shuttle with us. We scampered about looking for a table and quickly discovered that, unfortunately, the only seating places available where those without umbrellas. If you’ve ever been to Guatemala, you’ll know the sun here is murderous between the hours of 11 am to about 4:30 pm – the reason those tables were empty in the first place.

At first, I was just content to take pictures and look around, but my wife, mother, and daughter were getting antsy. My wife went up to a waiter near the restaurant to ask when would tables become available and the server replied there weren’t any right now and promptly turned around never offering to help her find one.

As more people arrived via their vehicles, it became a ridiculous game of musical chairs, where people just milled about staring daggers into people that had apparently finished their meal and were taking their sweet time to get up and let others have a seat.

After more than 25 minutes of this, we headed downstairs and sat at the corner of the bar, having to look for additional chairs ourselves, as the two people manning the bar seemed unconcerned about us. Eventually, we resigned ourselves to sitting at the bar with our child. Not ideal, but also not a big deal since we weren’t about to order a proper meal.

After requesting a menu (none was offered), I decided to order a ceviche – it was delicious. Something to note here is that there’s no chicken or beef on the menu – only a selection of shrimp-based dishes that Bubba Gump would love: there’s breaded shrimp, shrimp pasta, shrimp skewers, shrimp salad, shrimp pizza, shrimp ceviche, shrimp quesadilla and shrimp smoothies. Ok, I made the last one up, but you get the point. 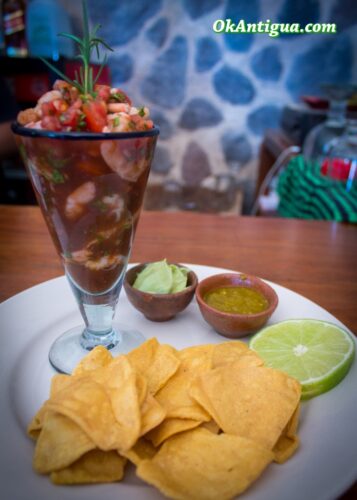 There’s a tilapia farm being built on premises, which will broaden the menu. For now, a lot of the food on the menu relies heavily on vegetables and cheese – pizzas and quesadillas are your best bet.

After two enthusiastic thumbs up for the ceviche, we ordered some coffee, which was unremarkable and rather pricey at Q20. 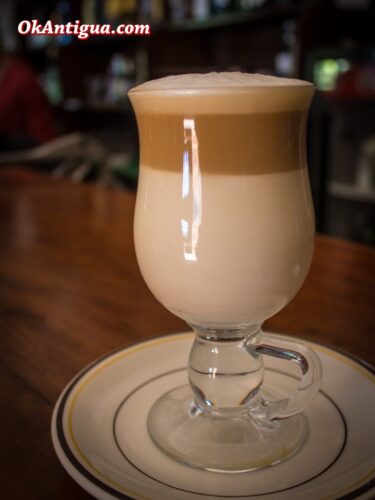 I’m glad to report that I’ve visited a few times since my first visit. They’ve sorted out the seating arrangements and now a hostess makes sure that visitors are promptly seated or at least given an estimated time.

The service is has been courteous and prompt. I’ve also had the chance to try their pizzas. I highly recommend the shrimp pizza (lots of olive oil, so it may not be everyone’s cup of tea).

Prices At The Restaurant

Prices are for the most part affordable – at least much more so than at Tenedor del Cerro. You can check out the menu here.

The highest-priced item is the fettuccini pasta and salmon at Q125. Twelve-inch pizzas cost between Q70 and Q90, while plates of pasta range from Q50 – Q75. You won’t find red meat or chicken in any of the dishes, only fish or shrimp.

Quesadillas range from Q50 to Q55 and salads are Q40. They also have blooming onion starters, nachos, and other appetizers. Breakfast mains cost between Q30 to Q50.

The bar offers a limited selection of cocktails, shots, wine and other drinks, which should be more than enough to find a drink to pair with your meal.

The shuttle and service issues seem to have been sorted out. I highly recommend checking Cerro San Cristobal out.

There’s a small town just a quarter mile up the road from the restaurant. While the town isn’t that picturesque (it’s really tiny), it makes for a pleasant after-meal visit on Sundays, when the town hosts a crafts fair in the tiny main plaza. Their marmalades, made with regional fruits, are great if you have a sweet tooth.